The Smart City Cluster is developing the Simbiopark project, which aims to develop a methodology to identify and implement water, material and energy cycles in technology parks and industrial environments.

The current economic system is based on a growth model that is heavily dependent on the consumption of raw materials. This linear “take – make – waste” model has resulted in excessive pressure on the environment, which has led to some of the most serious manifestations of the environmental crisis we are suffering, such as climate change and the loss of biodiversity.

To counteract these effects, it is necessary to find new economic models in which the use of raw materials is decoupled from economic growth, giving these resources time to regenerate without the need to slow down economic growth. In this context, the Circular Economy emerges as a new way of understanding the economy based on three fundamental principles:

In industry, the Circular Economy has applications at many levels, with Industrial Symbiosis being one of the most successful. This concept reflects symbiotic connections between companies that traditionally operate independently, based on the exchange or sharing of resources (materials, water and/or energy). Industrial Symbiosis has proven to be effective in reducing material needs, reducing energy losses, improving the economic performance of companies as well as improving the ecological footprint of industrial processes and the adoption of eco-innovation; creating added value for the actors involved.

The SIMBIOPARK project, developed by the Smart City Cluster with the support of the Ministry of Industry, Tourism and Trade in the framework of the Convocatoria Extraordinaria de Ayudas a las Agrupaciones Empresariales Innovadoras 2021 (AEI), within the framework of the Recovery, Transformation and Resilience Plan, consists of a feasibility study to design and test a methodology that will help, once consolidated, to develop Industrial Symbiosis projects in technology and industrial parks.

This involves the identification of material, water and energy cycles between the companies located in these spaces, as well as their optimisation. In principle, this type of initiative can be applied to any industrial environment in which there are flows of resources from which to extract value, so developing a methodology such as the one proposed represents an opportunity to generate a very positive impact on the economic and environmental efficiency of Spanish technology and industrial parks, which also has the possibility of being extended beyond these environments as it is possible to scale the cycles that are closed to incorporate, for example, entities located in cities or other nearby parks. 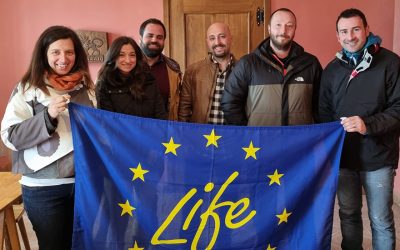 Precision agriculture in vineyards: Pilot visit as part of the Life+ WineGRover project